Introduction and Matrix Multiplication
Posted on 2021-07-12

Software performance engineering was common, because machine resources were limited

Programs had to be planned around the machine. Many programs wouldn’t fit without intense performance engineering.

The Moore’s law hit a bottle neck in 2004 where the clock speed can no longer scale. To scale the performace, the vendors started investing on parellel processor aka Multicore. Processor manufactures put many processing cores on the microprocessor chip. Each generation of Moore’s Law potentially doubles number of cores.

A naive way to do matrix multiplication in python

Let’s say we have super powerful machine like this. 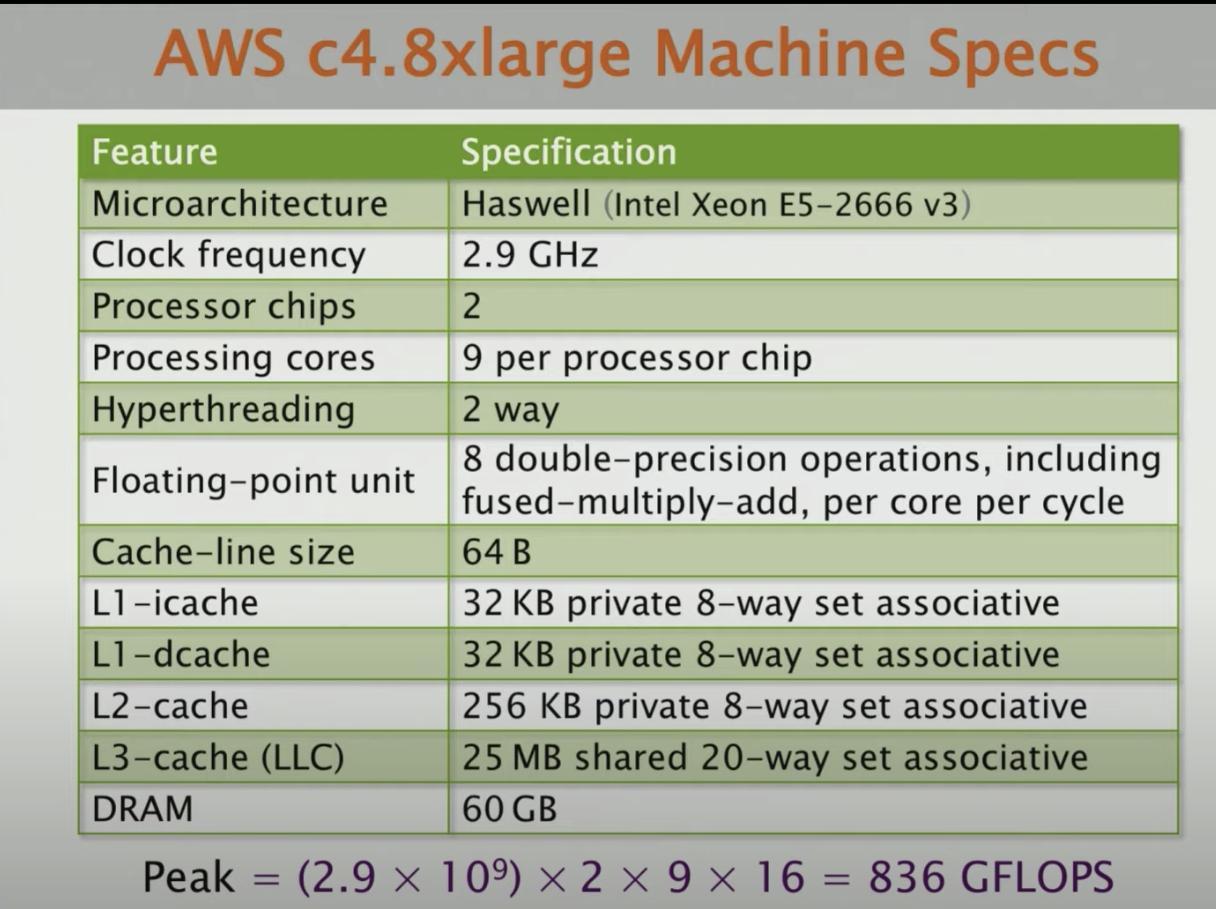 The Python code takes ~6 hours to run on that powerful machine. Let’s break this down.

Why is Python so slow and C so fast

Another optimization approach is to change the order of the loop. Changing the order of i,j,k doesn’t affect the correctness of the algorithm, but can give a huge perf boost

It turns out by just simply changing the order of the loop, the running time is affected by a factor of 18. So what’s going on? Each processor reads and writes main memory in contiguous block, caclled cache lines.

So the general rule is to avoid the cache misses. Once we load a piece of memory into cache, we want to reuse it as much as possible. Now let’s see how we load matrices into memroy.

The matrices are laid out in memory in row-major order. What does this layout imply about the performance of different loop orders? Let’s take a look at the original loop order 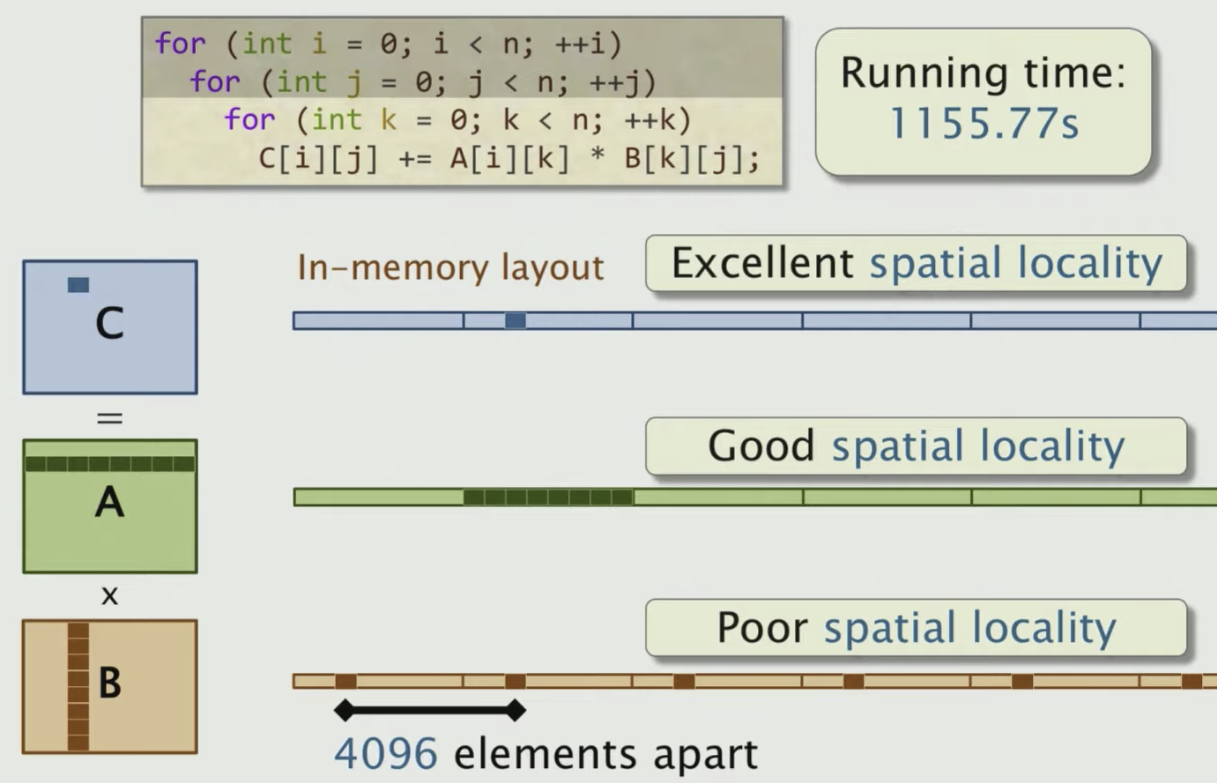 As we can see in pic, for C, since we keep updating it, it gets really nice spatial locality (stays in the cache). For A, we go through a linear order, we get a good spatial locality due to the contiguous access. But for B, the access of a each element is distributed far away in memory, not in contiguous postions. So it’s not good for caching. 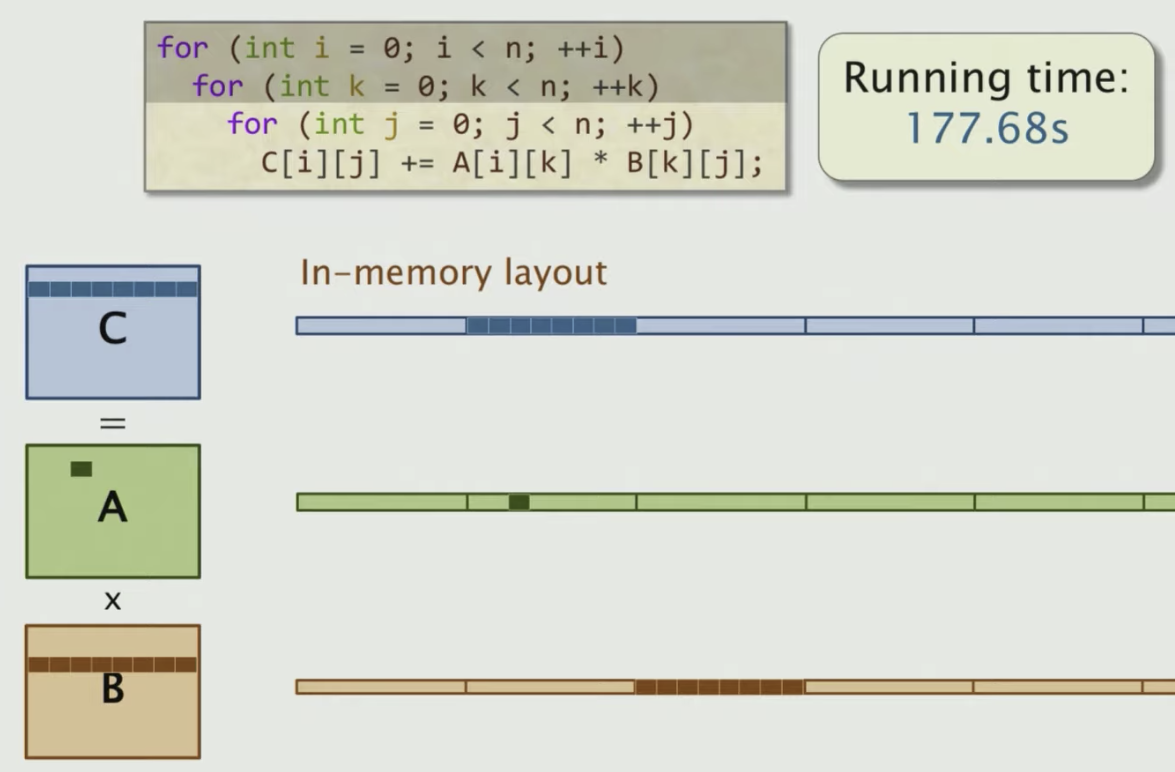 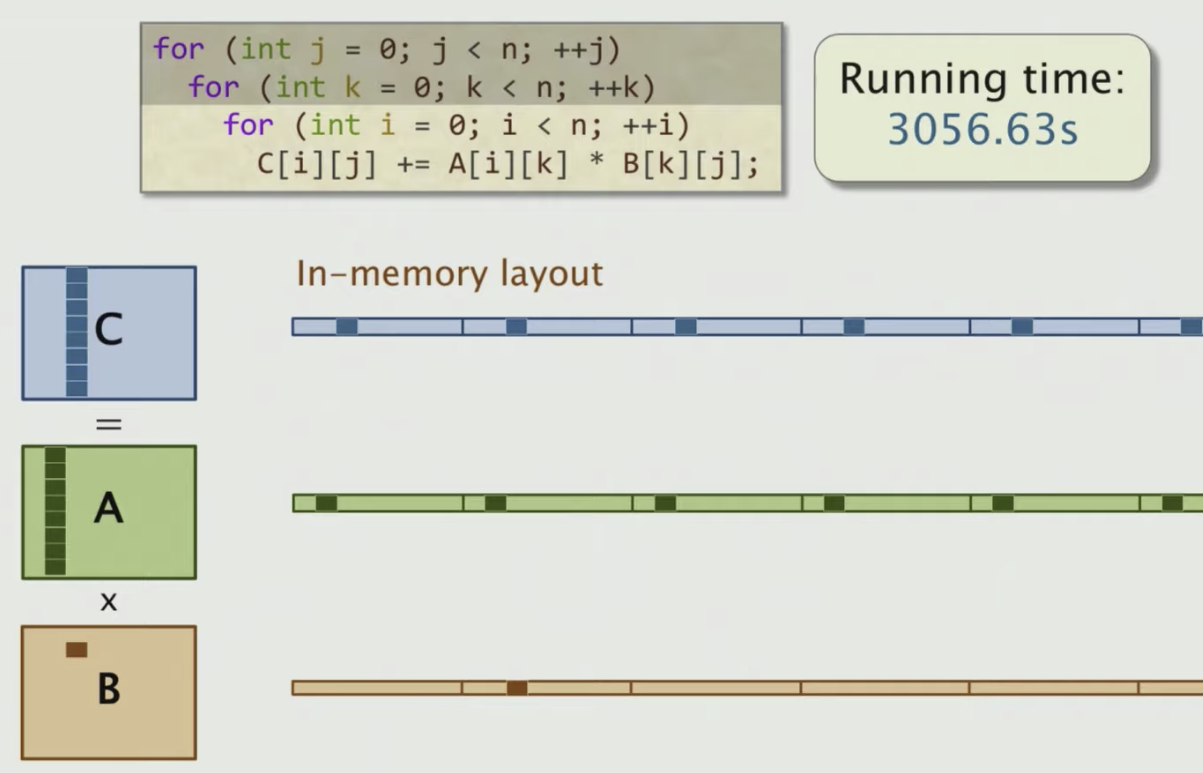 Clang provides a collection of optimization switches. You can specify a switch to the compiler to ask it to optimize.

Clang also supports opitmization levels for special purpose, such as -Os, which aims to limit code size, and -Og, for debugging purposes.

With this simple code and compiler technology, we can achieve 0.3% of the peak performance of the machine.

The cilk_for loop allows all iterations of the loop to execute in parallel.

Here we paralle the i loop, which leads to 3.18s. But we can also parallelize the inner loops, such as j loop and k loop. 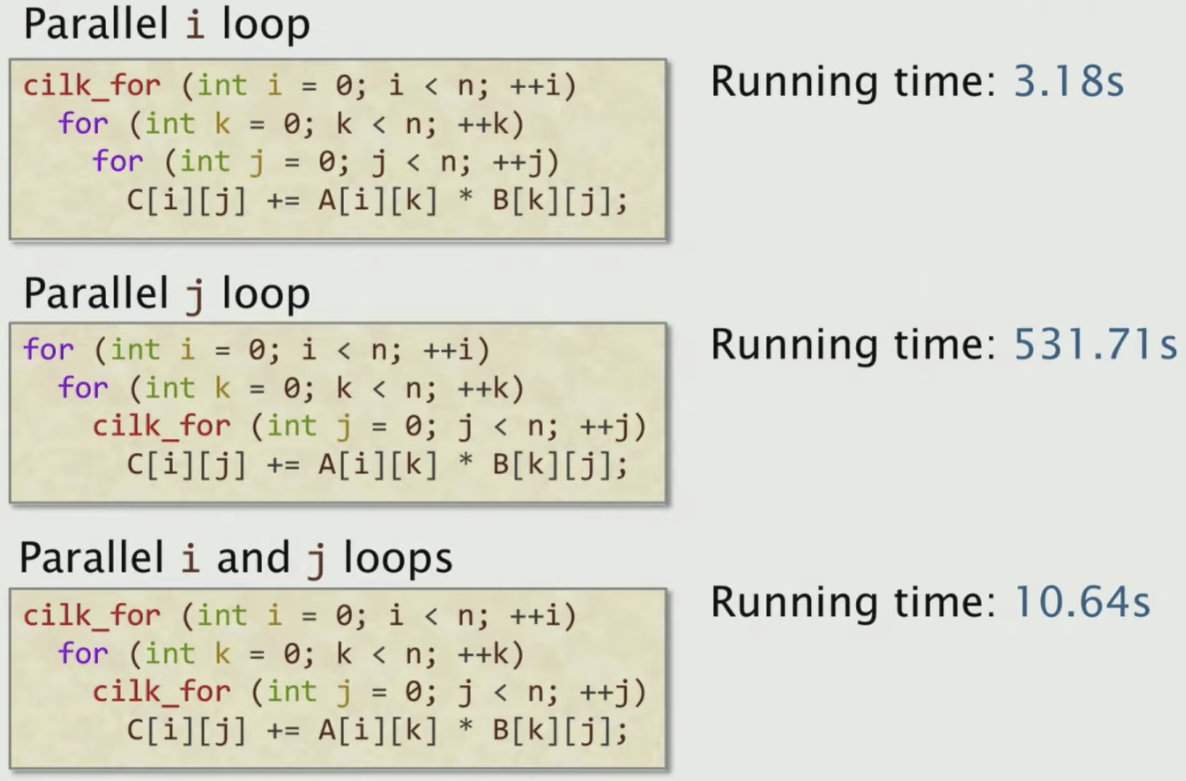 Using parallel loops gets us almost 18x speedup on 18 cores (Disclaimer: Not all code is so easy to parallelize effectively).

IDEA: Restructure the computation to reuse data in the cache as much as possible.

How many memory accesses must the looping code perform to fully compute 1 row of C?

What if we compute blocks rather than rows in matrics? Would that be faster?

Say we divide C into multiple blocks. For each block, it is 64x64. To compute each block we need

To implement that, we turn the code above to a tiled Matrix Multiplication

s is a tuning parameter to control how big is the tile. In this case, 32 is the best number. 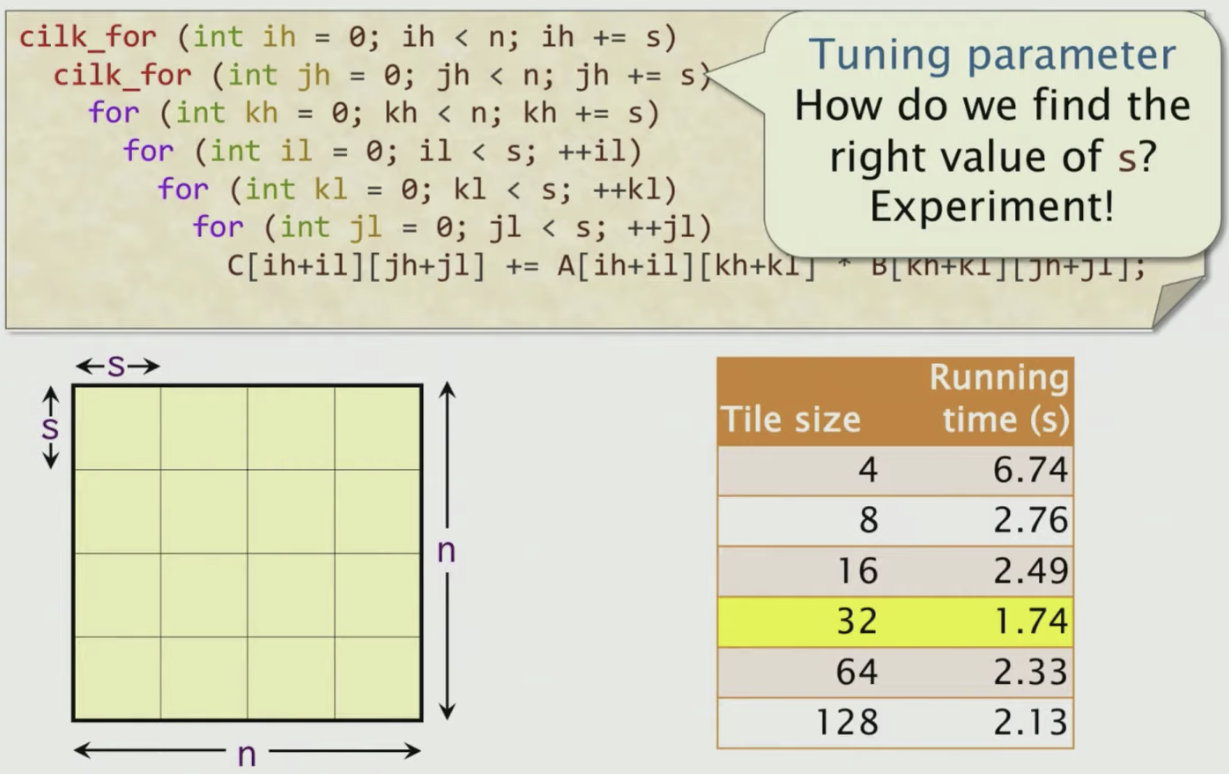 It turns out with the L3 caches, we can do nested tiled loops (a bit compilicated, not going to explain in detail.) 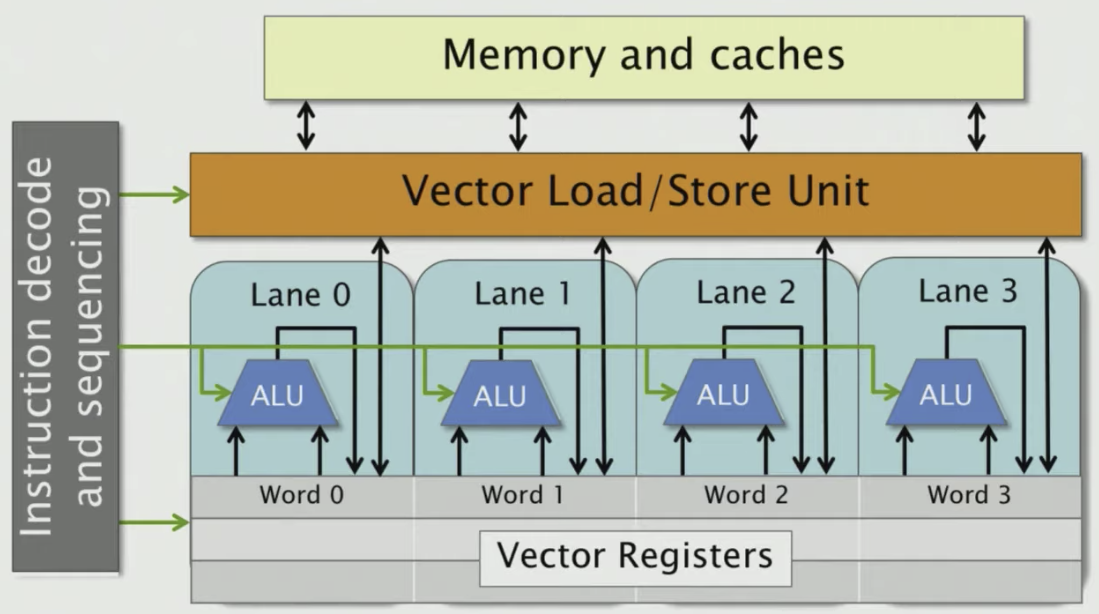 Clang/LLVM uses vector instructions automatically when compiling at optimization level -O2 or higher. Clang/LLVM can be induced to produce a vectorization report as follows:

Due to restrictions on floating-point arithmetic, additional flags, such as -ffast-math migth be needed for these vectorization flags to have an effect.

Using the flag -march=native and -ffast-math nearly doubles the performance.

Instead of letting compiler vectorize your code, you can also use the AVX instructions directly. Intel provies C-style functions, called instrinic instructions, that provide direct access to hardware vector operations.

We stop here as it beats the Intel MKL library which contains engineered math kernels for doing matmul (only for the 4096 x 4096 case).