Limitation: there is no way to free memory in the middle of the used-region on the stack. ONly the last object can be freed.

Unlike Java and Python, C and C++ provide no garbage collectors. Heap storage allocated by the programmer must be freed explicitly. Failure to do so can creates a memory leak. Also, watch for dangling pointers and double freeing

if no larger blocks exist, ask the OS to allocate more memory.

mmap, sbrk those are system calls for asking memory

In practice, this exact scheme isn’t used. There are many variants. It turns out that the efficiency is very important for small allocations. The overhead of this scheme could cause performance bottlenecks. In reality, we usually don’t go all the way down to the block of size 1. We might stop at block of size 8 bytes. This does increase internal fragmentations because we have some waste space.

Alternatively, we can also group blocks into pages. All of blocks in the same page have the same size.

The standard implementation of malloc uses mmap andd sbrk to allocate memory. It doesn’t use any memory allocator.

Theorem. Suppose that the maximum amount of heap memory in use at any time by a program is M. If the heap is managed by a BFL allocator, the amount of virtual memory consumed by heap storage is O(MlgM)

Proof. An allocation request for a block of size x consumes 2^{lg[x]} <= 2x storage. Thus, the amount of virtual memory devoted to blocks of size 2^k is at most 2M. Since there are most lgM free lists, the theorem holds.

Storage Layout of a program

This is how the virtual memory address space is laid out. 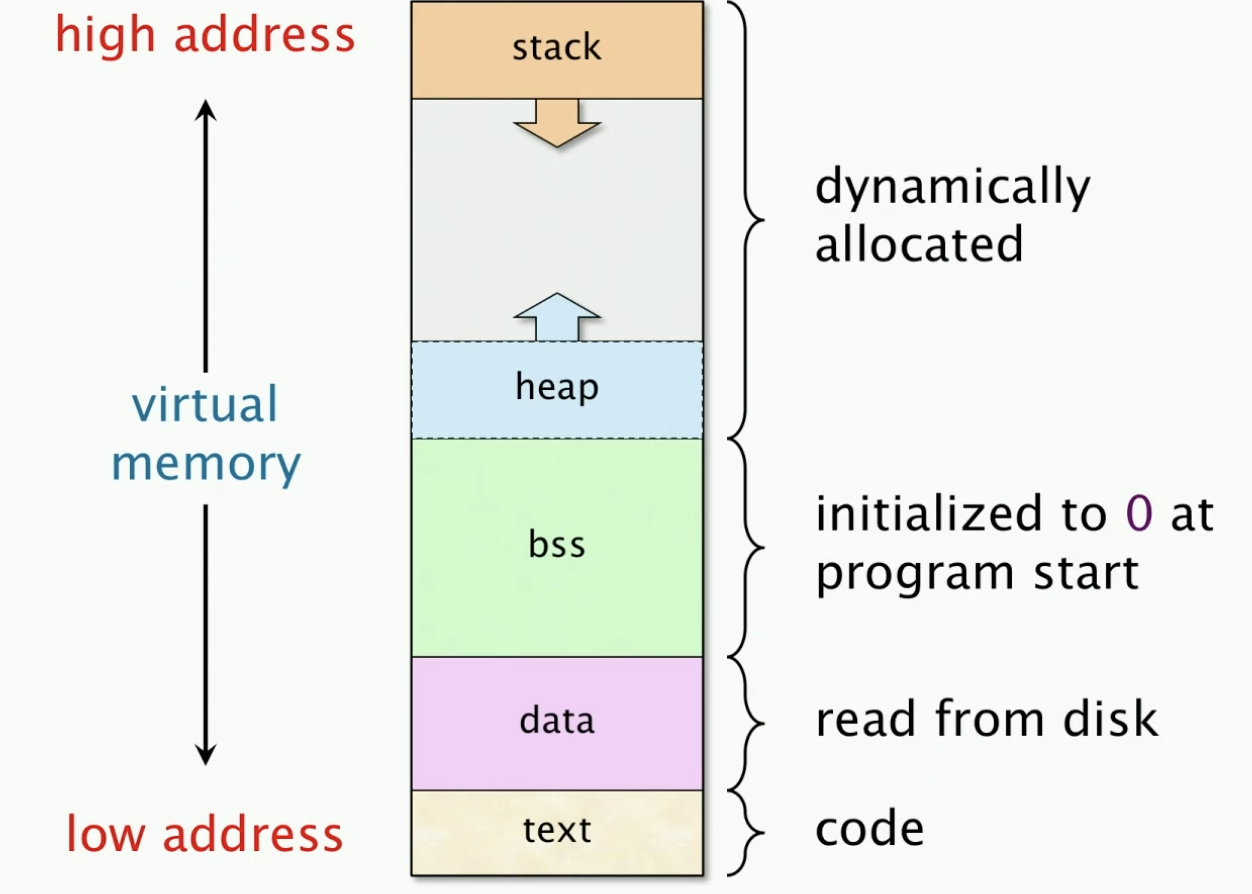 In practice, the stack and heap pointer are never going to hit each other because we’re working with 64bit addresses.

How virtual is virtual memory

A1: Will be running out of physical memory

A2: External fragmentation would be horrendous! The performance of the page table would degrade tremendously leading to disk thrashing, since all nonzero memory must be backed up on disk in page-size blocks.

Use as little virtual memory as possible, and try to keep the used portions relatively compact.

In order for GC to work, in general, you need to have the GC identify pointers, which requires

Keep a count of the number of pointers referencing each object. If the count drops to 0, free the dead object.

Objects and pointers from a directed graph G = (V,E). Live objects reachable from the roots. Use BFS to find the live objects.

The Mark and Sweep procedures has two stages

At a higher level, it is similar to Mark-And-Sweep GC. It uses BFS to identify the live objects. Since all vertices are placed in contiguours storage in Q, we can use our queue as new memory. All unreachable objects will be implicitly deleted. This procedure will deal with external fragmentation.

Linear time to copy and update all vertices.