void* malloc(size_t s); - allocate and return a pointer to a block of memory containing at least s bytes.

void* memalign(size_t a, size_t s); - allocate and return a pointer to a block of memory containing at least s bytes, aligned to a multiple of a where a must be an exact power of 2: 0 == ((size_t)memalign(a, s)) % a. One reason to use memalign is to align the memory allocation to cache line to reduce the number of times of cache misses. Another reason is that the vectorization operations also requires the memory addresses to aligned with power of 2.

void free(void *p); - p is a pointer to a block of memory returned by malloc() or memalign(). Deallocate the block.

The Linux kernel finds a contiguous, unused region in the address space of the application large enough to hold size bytes, modifies the page table, and creates the necessary virtual-memory management structures within the OS to make the user’s accesses to this area “legal” so that accesses won’t result in a segfault.

What’s the difference between malloc() and mmap()

Q: Why just use `mmap` instead?

One anwser is that you might have free storage from before that you would want to reuse. It turns out that mmap is relatively heavy weight. It works on a page granularity. So if you wnat to do a small allocation, it’s quite wasteful to allocate an entire page for that allocation and not reuse it. You’ll get very bad external fragmentation. It also goes through all of the overhead of security of the OS and updaing the page table and so on. Whereas, use malloc is pretty fast for most allocations, and especially if you have temporal locality where you allocate something that you just recently freed. So your program will be pretty slow if you use mmap all the time even for small allocations.

If the virtual page does not reside in physical memory, a page fault occurs. When that happens,the OS will see that the process acutally has permissions to look at the memory region, and it will set the permissions and place the entry into the page table so that you can get the appropriate physical address. Otherwise, you’ll get a segmentation fault.

Since page-table lookups are costly, the hardware contains a translation lookaside buffer (TLB) to cache recent page-table lookups. The page-table store pages which are typically 4kb. Nowadays, there are also huge pages, which can be a couple of megabytes. And most of the accesses in your program are going to be near each other. So they’re likely going to reside on the same page for accesses that have been done close together in time. Therefore, you’ll expect that many of your recent accesses are going to be stored in the TLB if your program has locality, either spatial or temporal locality or both.

So how this architecture works is that

Most of modern machines acutally have an optimization that allow you to do TLB accesses in parallel with the L1 cache access. So the L1 cache acutally uses virtual addresses instead of Physical addresses, and this reduces the latency of a memory access.

So when you execute a serial c and c++ program, you’re using a stack to keep track of the function calls and local variables that you have to save. An execution of a serial C/C++ program can be viewed as a serial walk of an invocation tree.

In the example below, we have function A calls function B and C, function C calls D and E

Rule for pointers: A parent can pass pointers to its stack variables down to its children, but not the other way around.

A cactus stack supports multiple views in parallel. In the serial stack, the later allocated memory overrides the previous memory in stack. In parallel situtaions, function B, D and E could execute in parallel, and they still want to share the same stack view of A. So how to do that? 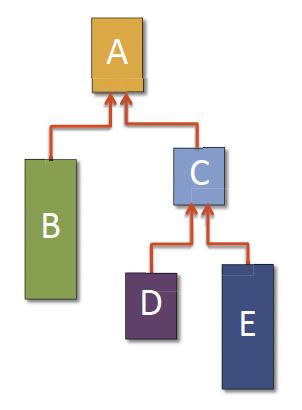 So whenever you do a function call, you’re going to do a memory allocation from the heap to get a new stack frame. And then when you finish a function, you’re going to pop something off of this stack, and free it back to the heap.

Allocator Speed is the number of allocations and deallocations per second that the allocator can sustain.

Q. Is it more important to maximize allocator speed for large blocks or small blocks? A. Small blocks!

Q. Why? A. Typically, a user program writes all the bytes of an allocated block. A large block takes so much time to write that the allocator time has little effect on the overall runtime. In contrast, if a program allocates many small blocks, the allocator time can represent a significant overhead.

Modern 64-bit processors provide about $2^{48}$ bytes of virtual address space. A big server might have $2^{40}$ bytes of physical memory. 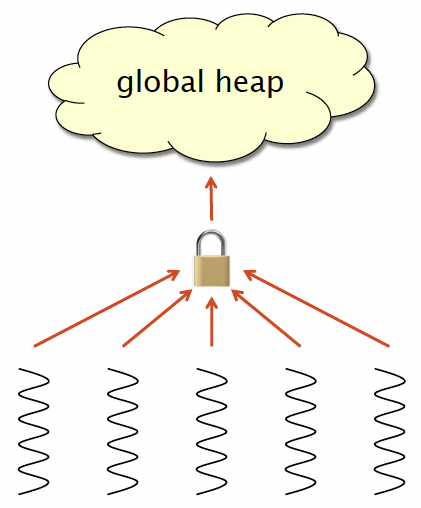 Ideally, as the number of threads (processors) grows, the time to perform an allocation or deallocation should not increase. The most common reason for loss of scalability is lock contention.

Q. Is lock contention more of a problem for large blocks or for small blocks? A. Small blocks!

Q. Why? A. Typically, a user program writes all the bytes of an allocated block, making it hard for a thread allocating large blocks to issue allocation requests at a high rate. In contrast, if a program allocates many small blocks in parallel, contention can be a significant issue. 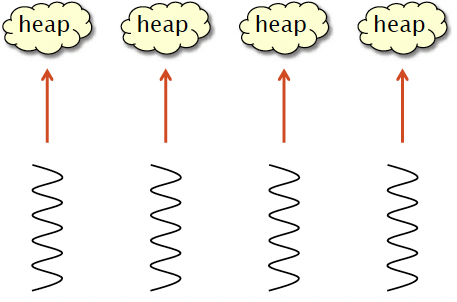 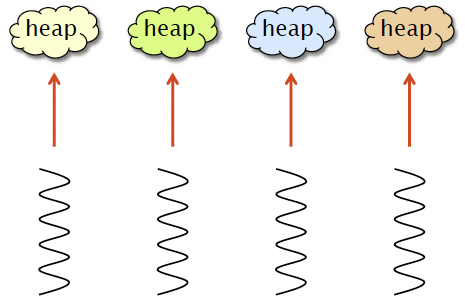 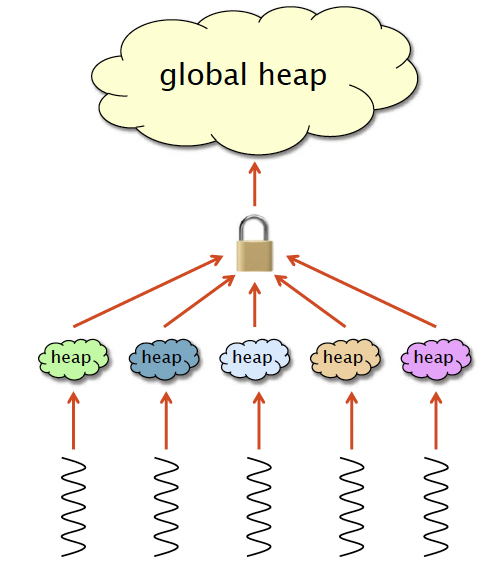 Assume without loss of generality that all blocks are the same size (fixed-size allocation). x = malloc() on thread i

Let u[i] be the in-use storage in heap i, and let a[i] be the storage owned by heap i. Hoard maintains the following invariant for all heaps i:

where S is the superblock size.

free(x), where x is owned by thread i: