How Does C Code Become Assembly

However, the direct mapping from C to assembly is not so obvious 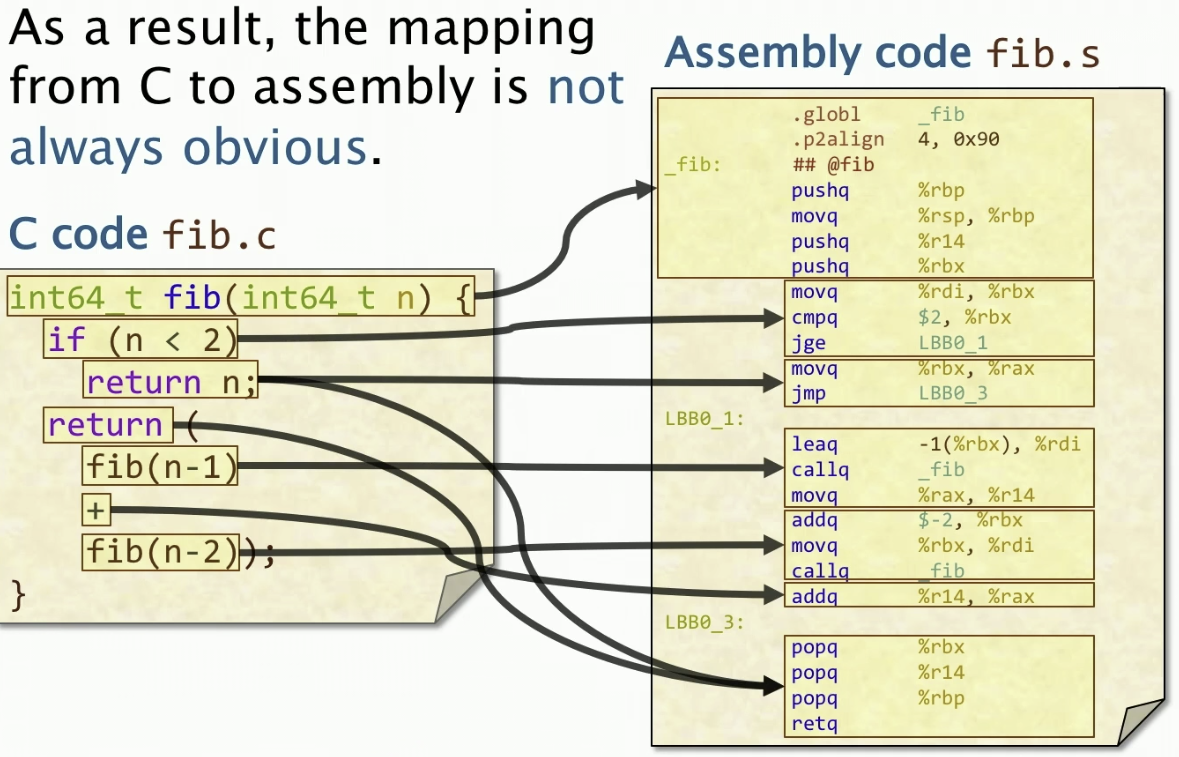 To understand this translation process, let us see how the compiler reasons about it. 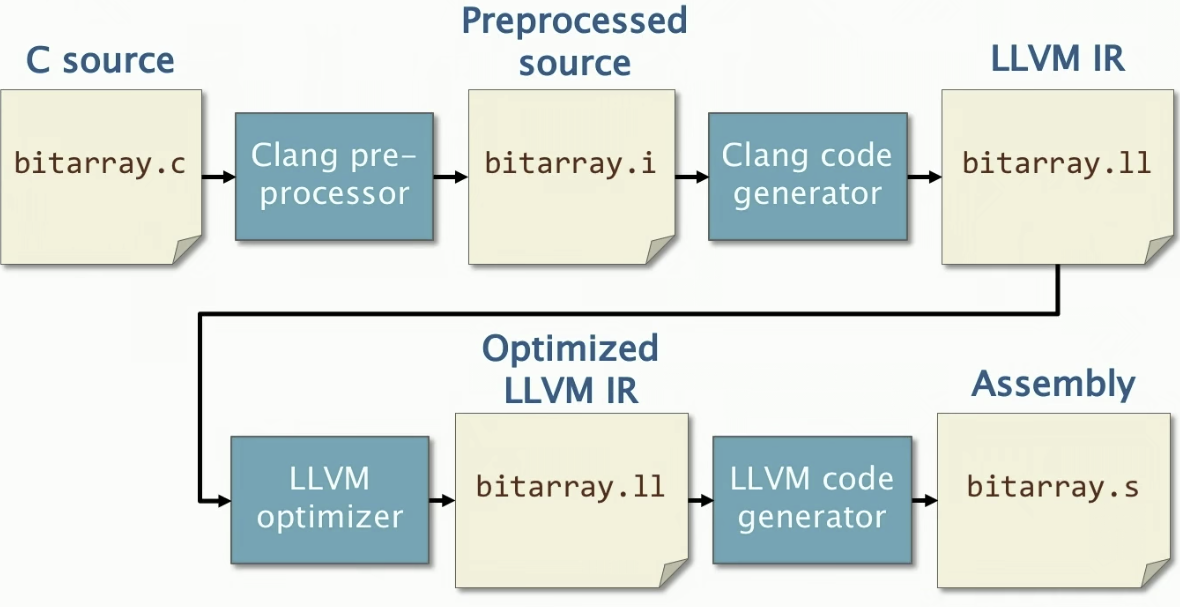 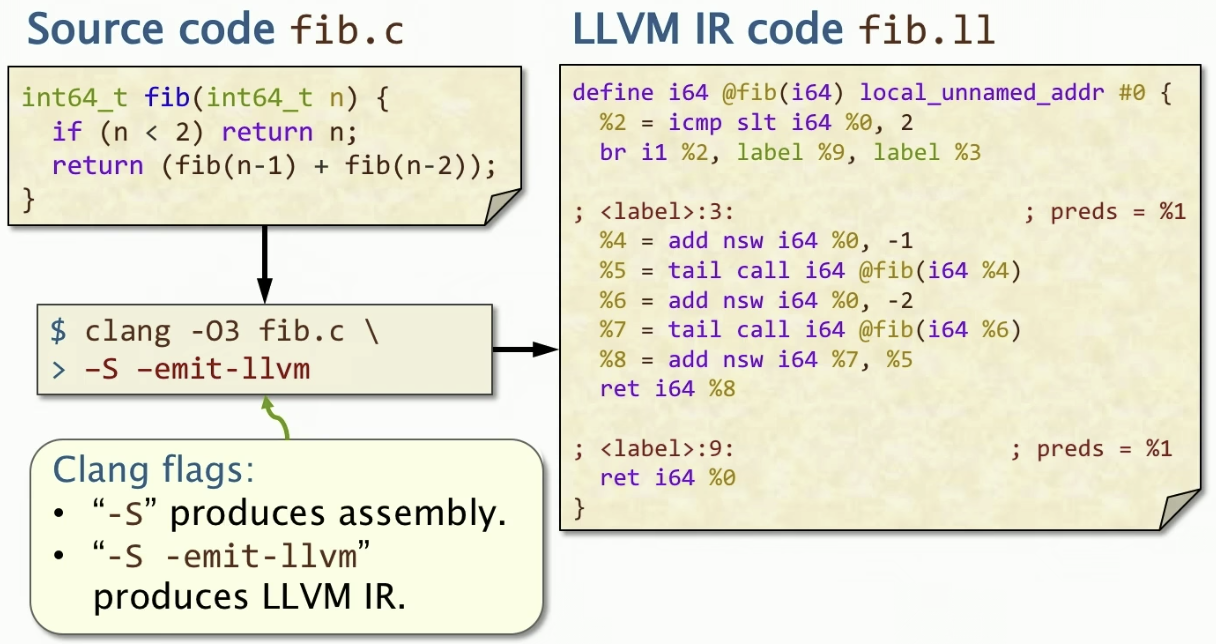 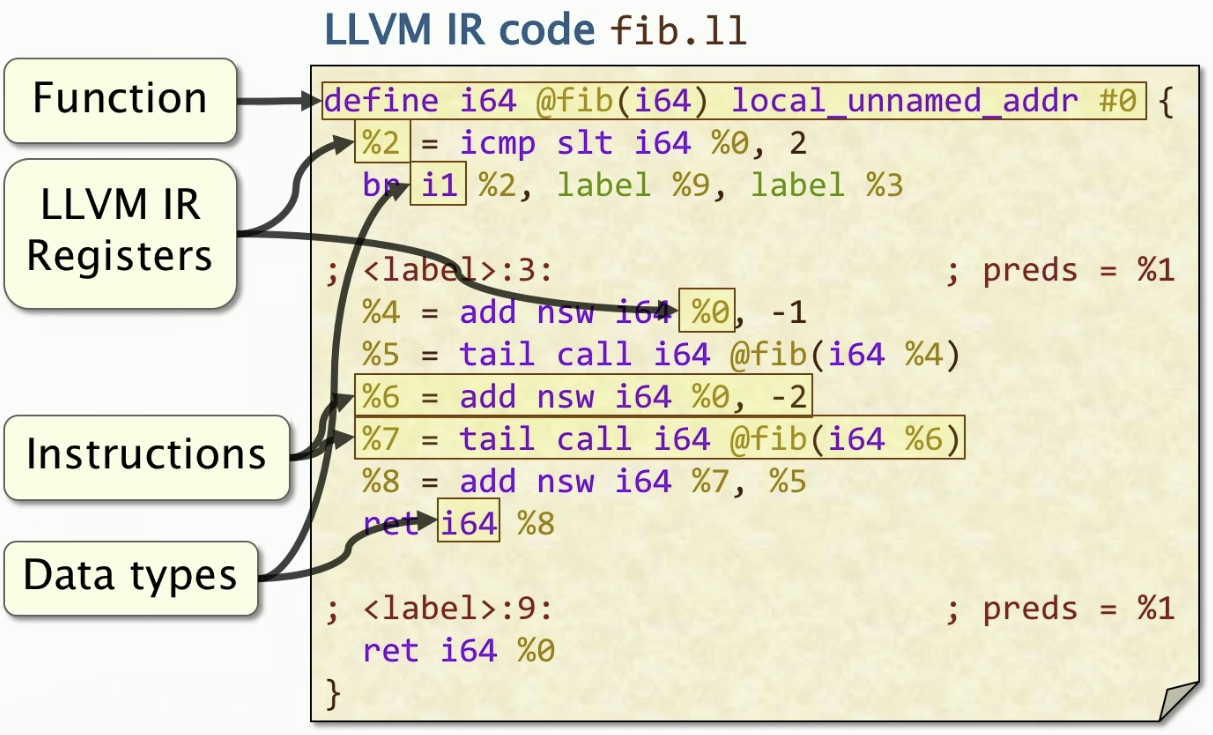 LLVM IR is similar to assembly

LLVM IR is simpler than assembly

One catch: We shall see that LLVM hijacks its syntax for registers to refer to “basic blocks”.

LLVM-IR code is organized into instructions 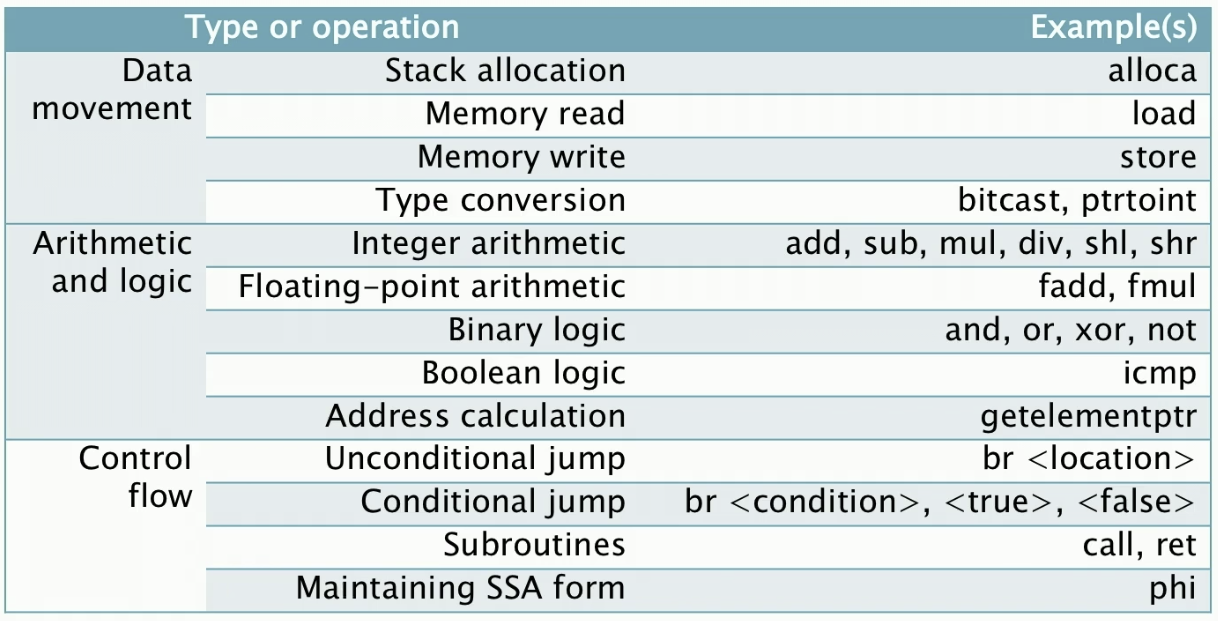 A variable with an aggregate type (i.e., an array or a struct) is typically stored in memory. Accessing the aggregate type involves computing an address and then reading or writing memory.

The getelementptr instruction computes a memory address from a pointer and a list of indices. Example: Compute the address %2 + 0 + %4. 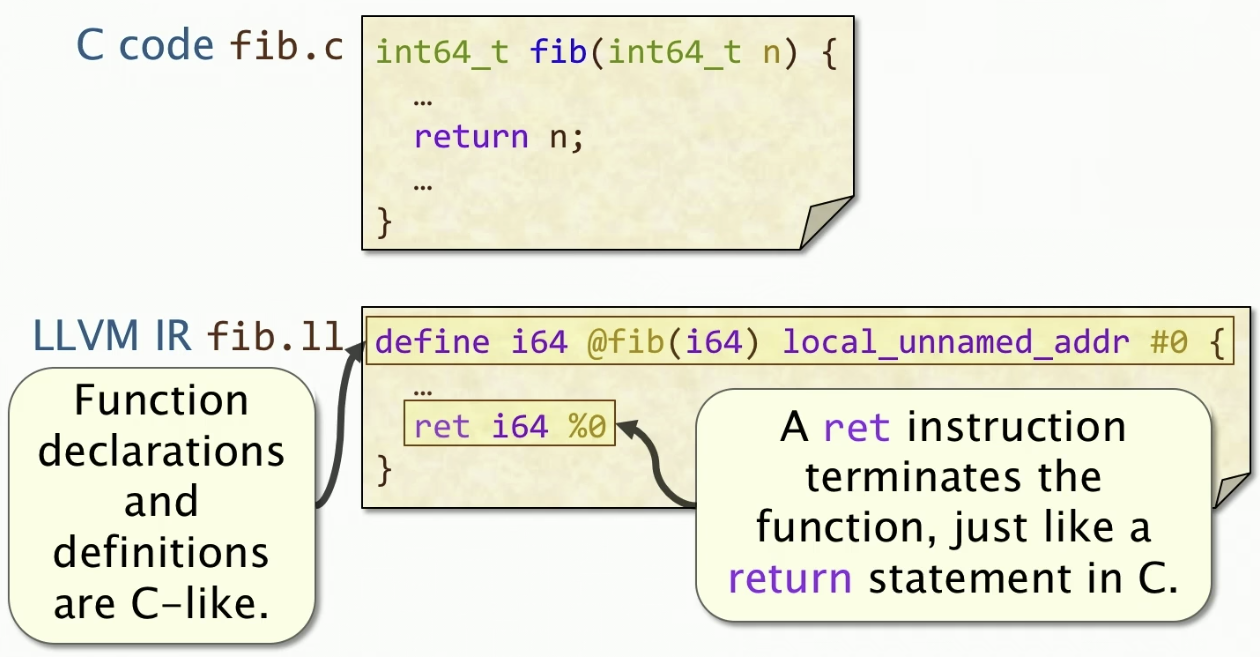 The body of a function definition is partitioned into basic blocks: sequence of instructions (i.e., straight-line code) where control only enters through the first instruction and only exists from the last.

The conditional branch in LLVM IR takes as arugments a 1-bit integer and two basic-blcok labels.

If a br instructions has just one operand, it is an unconditional branch

In general, a C conditional typically creates a diamond pattern in the CFG 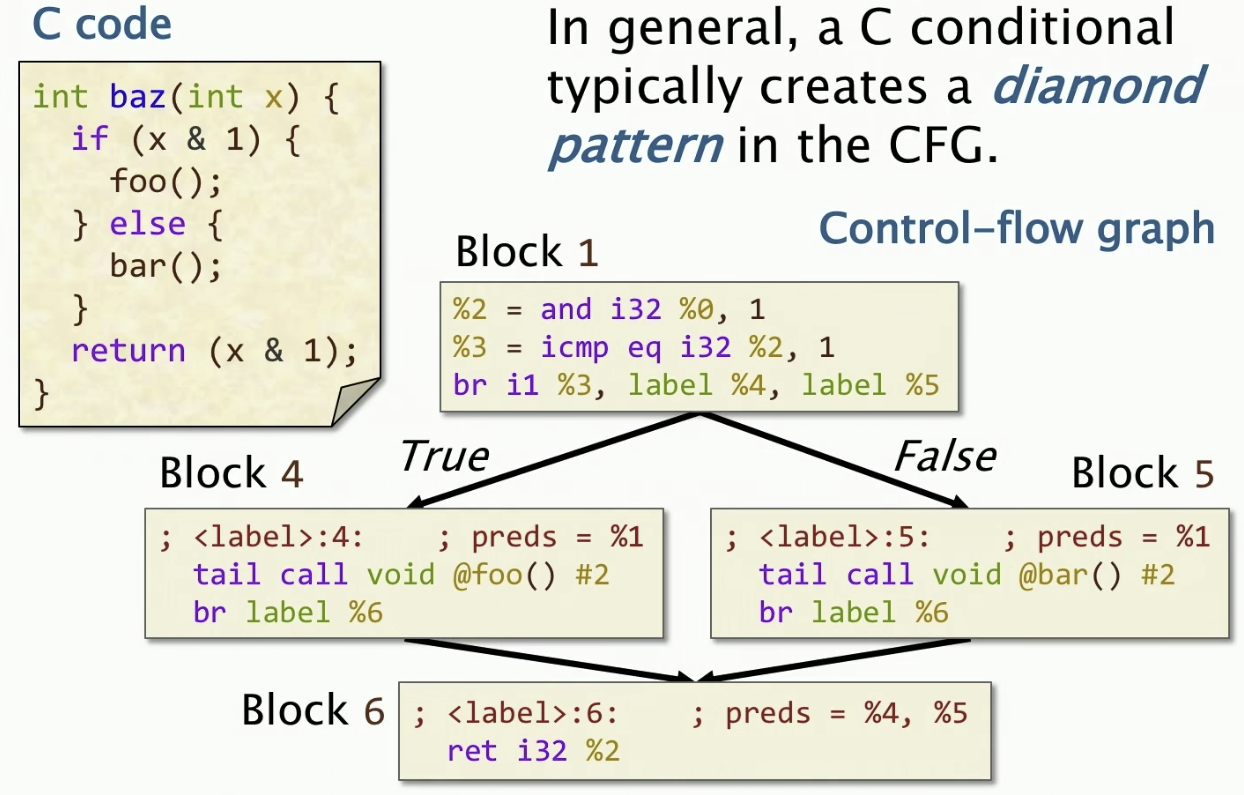 The loop control for a C loop consists of a loop induction variable, an initialization, a condition, and an increment. The induction varaible changes registers at the code for the loop increment. 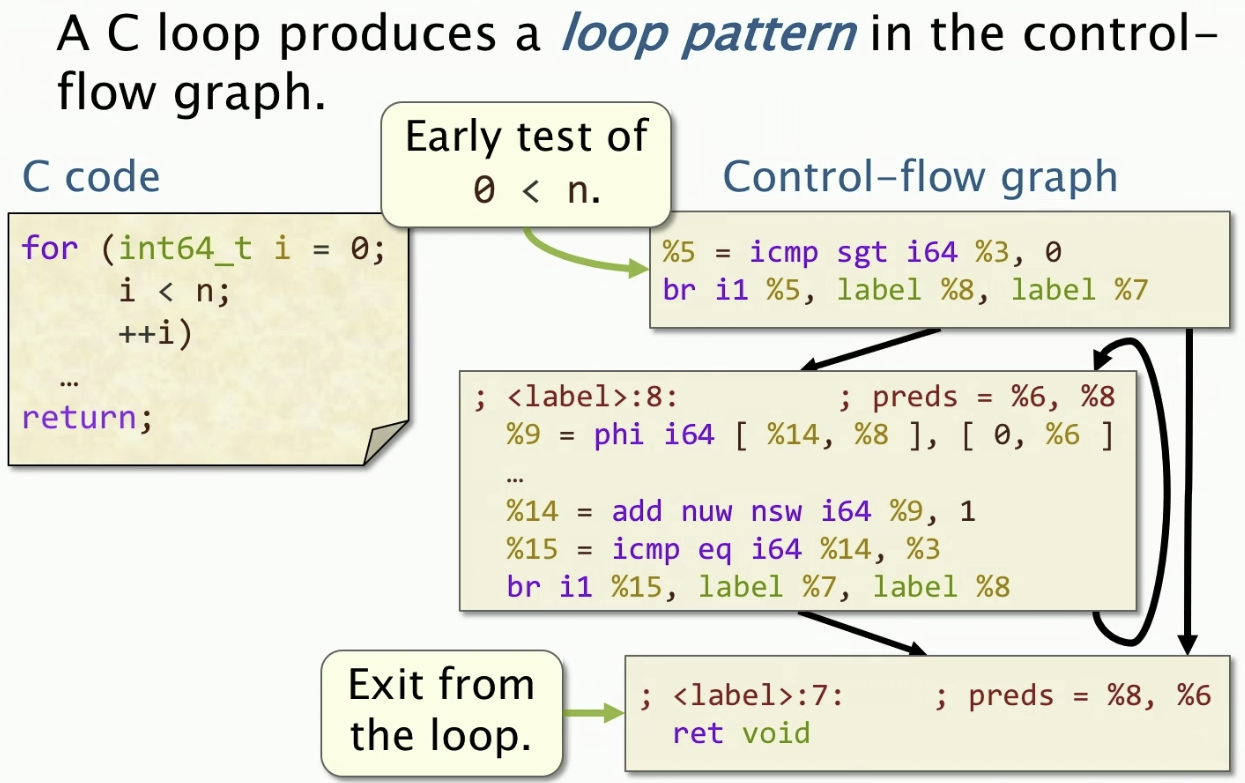 LLVM IR maintains the static single assignment(SSA) invariant: a register is defined by at most one instruction in a function. But what happens to the induction variable which changes as iteration goes or as the loop unfolds ? The answer is phi instruction.

The phi instruction speficies, for each predecessor p of a basic block B, the value of the destination register if control enters B via P. 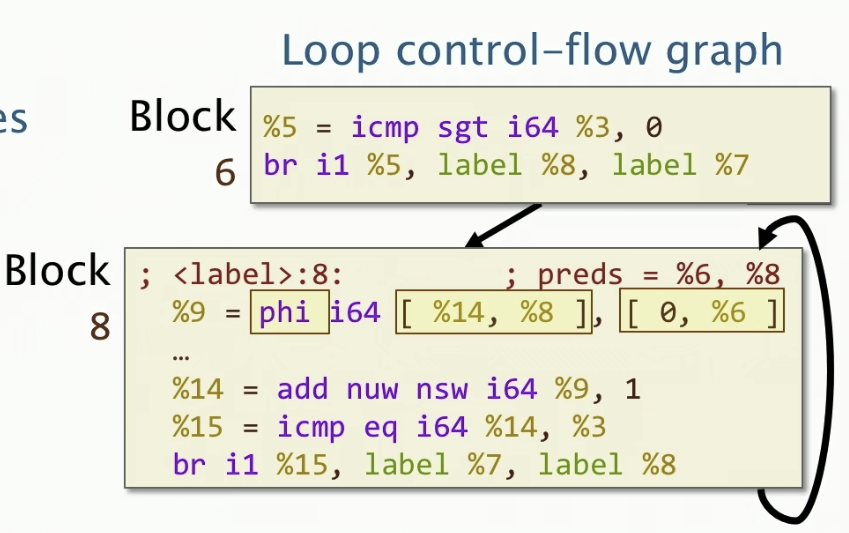 In this particular code, the phi instruction says, if the the code comes from block6 which is the entry point the loop, then the reigster %9 is going to be 0. Otherwise, it is going to adpot the value %14 which holds the incremental operation (i+=1).

LLVM IR constructs (e.g., instructions, operands, functions, and function parameter) might be decorated with attributes. Some attributes are derived from the source code. 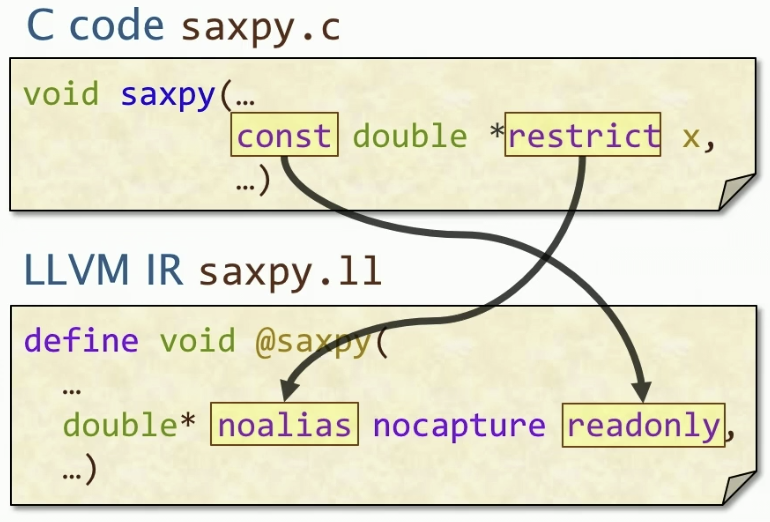 Other attributes are determined by compiler analysis.

LLVM IR is similar to assembly, but simpler.

THe compiler must perform three tasks to translate LLVM IR into x86-64 assembly.

When a program executes, virutal memory is organized into segments. 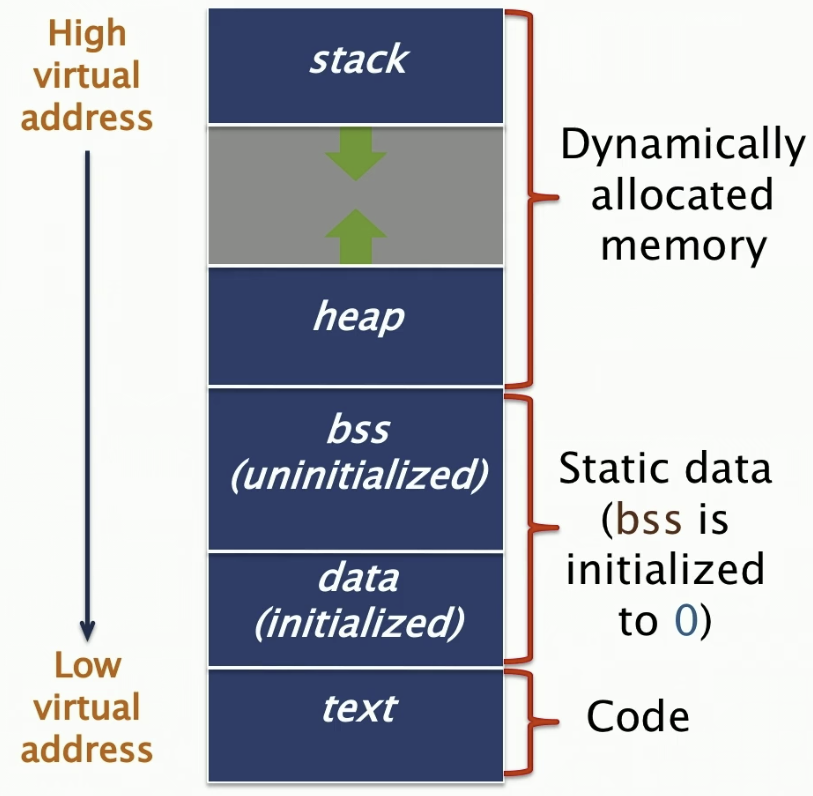 Assembly code contains directives that refer to and operate on sections of assembly.

The stack segment stores data in memory to manage function calls and returns. More specifically, what data is stored on the stack?

Hwo do functions in different object files coordinate their use of the stack and of register state?

The Linux x86-64 calling convention organizes the stack into frames, where each function instantiation gets a single frame of its own.

The call and ret instructions use the stack and the instruction pointer, %rip, to manage the return address of each function call.

PROBLEM: Say we have two functions, function A wants to call function B. Those functions might want to use the same registers. Who’s responsible for preserving the register state across a function call and return? e.g., A doesn’t get corrupted data from reigsters.

The Linux x86-64 calling convention does a bit both. 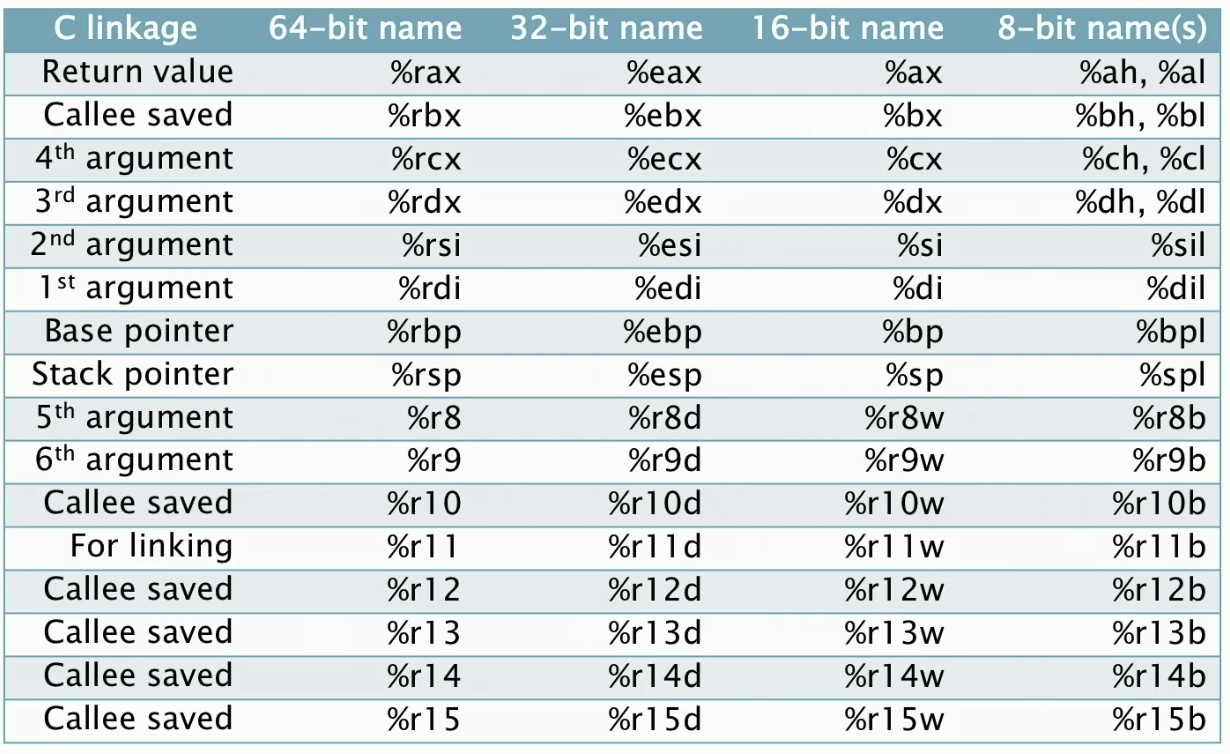